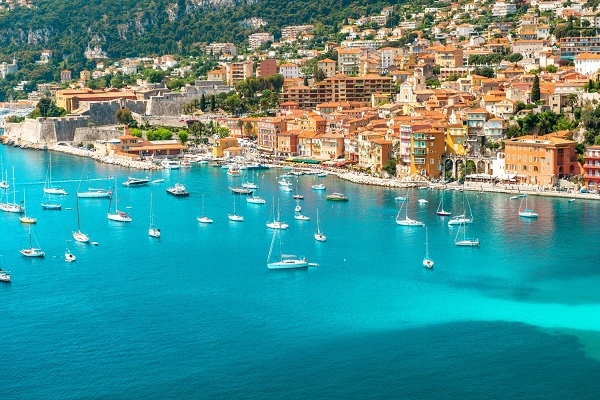 This sun-soaked corner of south-eastern France is a quintessential summer playground. For tourism purposes, the universally acknowledged extent of the French Riviera is contained within the Alpes-Maritimes department, stretching from Théoule-sur-Mer in the west via the Principality of Monaco to Menton in the east close to the border with Italy.

The French Riviera is also known as the Côte d’Azur, a name coined in 1886 by French politician and writer Stéphen Liégeard, in his book La Côte d’Azur. These days the Azure Coast is still synonymous with all the pleasures the name suggests. But it wasn’t always so. In the late 1800s, the South of France was primarily a winter destination. Wealthy and aristocratic northern Europeans used to flee the harsh months for the balmier climes of the regional capital, Nice. Being seen on the Riviera during the summer was a social faux pas.

But in the 1920s the Côte d’Azur became a popular summer haunt for a growing contingent of Americans, with celebrities such as Rudolph Valentino, Gertrude Stein and F Scott and Zelda Fitzgerald all arriving to sprinkle their stardust. At the centre of this glittering scene was the monied, bohemian couple, Gerald and Susan Murphy, who even persuaded the Hôtel du Cap-Eden-Roc on the Cap d’Antibes to open for the summer. Gerald Murphy later provided Fitzgerald with the inspiration for his character Dick Diver in Tender is the Night.

Film-makers have long flocked to the Côte d’Azur. The Riviera of the 1920s provided inspiration for Woody Allen’s latest movie, Magic in the Moonlight, which is released on 19 September. The plot revolves around a beautiful and charismatic spiritualist, played by Emma Stone, who appears alongside Colin Firth and Eileen Atkins.

One of the most eagerly awaited events in the Côte d’Azur’s social calendar is the Cannes Film Festival (festival-cannes.fr) in early May. The Monaco Grand Prix is another ritzy highlight in the same month. A more low-key alternative is the Nice Jazz Festival (nicejazzfestival.fr), which this year takes place from 8 to 12 July. With events at two locations in the city, the Place Masséna and Théâtre de Verdure, it attracts global talents, which this year include De La Soul, Dr John and the Gipsy Kings.